Another Half of the Story 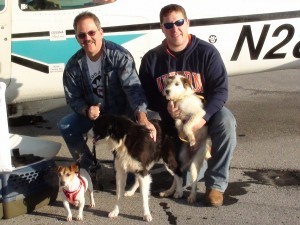 Our 12th Pilots N Paws Rescue, December 28, 2011, started at Huntsville Airport in Alabama. The trip continued to Bainbridge, GA, Tuscaloosa, AL, and finally, Hohenwald TN. However, I was not able to partake in the trip. Our neighbor, Adam Wallace, accompanied Todd on the trip. Todd and Adam picked up three dogs from Huntsville, a Border collie named Lawrence, a scruffy dog named Patches, and a Jack Russell terrier, of all things named “Jack”. These furry animals then flew to Bainbridge Georgia, where they met up with Jeff Bennett, another Pilot N Paws pilot. Todd and Adam picked up two dogs from Jeff, one a Shepard mix and the other a terrier mix.  After helping Jeff load his southbound airplane with 31 dogs to fly back to Orlando Florida. Todd and Adam flew the Shepard mix (no name) to Tuscaloosa Alabama and the final dog Mike went to Nashville Tennessee.

The northern part of the transport involved 4 separate move requests and two weather delays. The rescue groups and shelters did a fantastic job as these pilots moved 5 dogs (2 of them went north and 3 south). You can view more about Jeff Bennett’s rescue here. 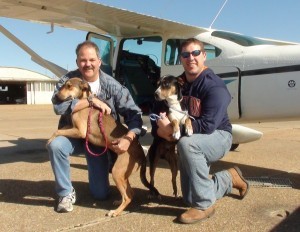 This was a complex rescue but ended up very successful. We appreciate how hard the volunteers work facilitating constantly changing dogs, destinations, times, pilots, and weather.

Unfortunately many others aren’t as lucky, and as you all know, the only answer to this devastating issue is to spay/neuter/rescue.

Petmate and Subaru – Their assistance to our pilots and other volunteers is crucial to our success.