28 Dogs get new leash on life!

Whimpering and whining coming from inside a small aircraft could be heard Wednesday morning at the Outlaw Field airport.

With a strong breeze on the tarmac, Inge Irby of Second Chance and Happy Trails — along with several agencies, friends and Pilot N Paws volunteers Scott Messinger and Jeff Myers — loaded 28 dogs on a small aircraft headed to Bridgeport, Conn. The pilots were trying to beat the weather. 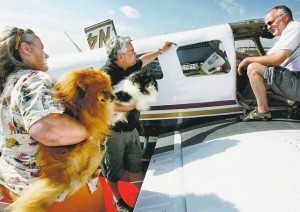 “We wanted the pilots here sooner, but the strong weather systems had kept them away,” Irby said. “Most of the dogs are rescued from around the area.”

More than half the rescued dogs have already been adopted, she added.

“In the South, everyone wants a perfect puppy,” she explained. “But in Connecticut, where the neutered laws are more strict, they will take any pup or dog no matter what.”

Irby’s husband, Greg, held a small, brown, shivering poodle. Irby explained that the poodle’s owner had died and the family did not want to keep the dog. The poodle already has a new home in Conn.

Messinger has made four trips to Clarksville. The aviator volunteers his time and plane to Pilots N Paws. He said its costs about $3,000 a trip.

“I fly from Maine to southern Louisiana,” Messinger said. “I pick up more than 100 rescued canines a month.”

Irby said she couldn’t do it without the help of volunteers and places like Animal House on Dover Road, Precious Friends and others who donate their talents to prep the dogs for transport and adoption.