A Christmas Miracle Flight for a Paralyzed Doxie named Sammy

From Pilot Scott Messinger:
PARALYZED DOXIE’S AIR AMBULANCE FLIGHT
It was early evening, and we were packed for the next day’s “routine” trip to Knoxville for The Blount County Animal Shelter.. And then the call came in.  “Do you know anyone going to Knoxville? We have a critically injured doxie in Rochester who needs to get to Knoxville for surgery”. 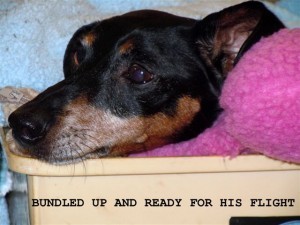 Sammie, bundled up for his medical flight

It was Diane Irwin from All American Dachshund Rescue. She explained that Sammy woke up and was unable to move. It appeared to be  a spinal injury.
I thought to myself, Id love to help, but there were 2 problems.  Rochester is 2 hours NORTH and we’re going south! (Already looking at 7 hours due to  50 knot headwinds). Our  7 hour trip had just turned into 11.
Heavy rain was forecasted for the following morning, so I told Diane that I had my doubts if we could even  make the flight work. We talked about  lake effect snow, cold air, and rain and icing issues, especially in Northern New York State
The following morning, we got a gift. A warm southern flow of air. High freezing levels. The gods were smiling on Sammy that day. We compromised,  and Sammy’s foster , Wendy drove 3 hours to  meet us in Elmira, NY. Elmira was down to landing minimums in heavy rain, so an instrument approach was called for.  We broke out of he clouds at 200 feet above the runway, so the pucker factor was high that day. ( pilot humor) 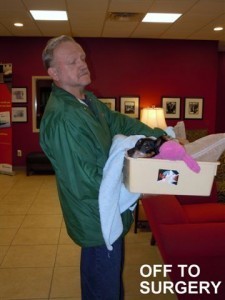 Sammie and his rescue friend

Sammys condition  was shocking. Wendy had him bundled in blankets and this dog could only move his head, but he didn’t seem in any pain. Sammy needed his bladder expressed, ( he was unable to do so due to a previous injury), so Wendy showed us how, just in case we were delayed along our route due to weather. We carried him to the plane in a drenching rain,  got our takeoff clearance, and were on our way south.
Sammys Story…..
Sammy is a very special dog. He was originally found tied to a crate,. dragging himself across the ground  to his food and water.
A neighbor called Rescue, because his back legs were all bloodied and bruised, a result of just dragging along the ground for so long.  He had probably been hit by a car,  and his owner did NOTHING to fix his hind legs. As a result the legs had atrophied and had become totally useless.
Rescue had him sent to a surgeon in Knoxville, where they repaired what they could and fitted him with “wheels”. Sammy not only flourished with his new wheels, he went on to become a certified therapy dog, and had become a celebrity at local Children’s Hospitals.
You don’t say no to such a wonderful dog.
We  finally landed at Smyrna, Tenn , around 8:30PM, and were met by Bob Irwin, from All American Doxy Rescue,. The surgeon was waiting, so  Sammy went  off to the hospital.for his emergency surgery.
Diane called today and said he was out of surgery and his paralysis was due to a crushed disc. Surgery went well, and the doctor is hopeful for a full recovery.
Sammy sends a very powerful message of hope and  empowerment to sick children in the Ontario, NY area. One can only imagine the  smiles on their faces as he scoots around the hospital  room bringing smiles of joy.
This time it was Sammy who needed help, and we  are proud to have been the ones representing Pilots N Paws for Sammy’s Air Ambulance Flight.
Get better soon, Sammy.  The kids are waiting!
Scott, PNP Pilot 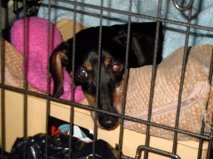 Sammy gets the help he needs, hurry home little guy!