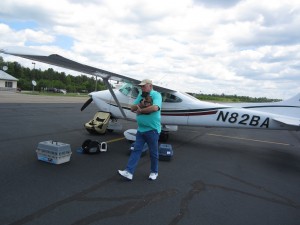 Captain Decker carries one of his passengers during the rescue transport from Rock Hill, South Carolina to Monmouth, New Jersey

Recently, former airline Captain, Keith Decker, was asked to transport some animals from a high kill shelter near his home base in Rock Hill, South Carolina to Monmouth, New Jersey. Our dear captain, ever the good hearted soul, agreed without question. After all it was about saving animals, something he is passionate about and has practiced hundreds of times since his retirement.

As Keith began his flight planning, he realized the trip would be about 450 nautical miles each way. Thinking quickly he decided to enlist the help of other pilots to take the animals from a halfway point which happened to be along Virginia’s Eastern Seaboard. This would allow our fast thinking captain to indulge in yet another passion, fresh seafood!

Enter two pawns; Pilot Nick O’Connell and his good friend and fellow pilot, O’Neil Jones. Keith called Nick about the mission and requested he and O’Neil take the animals from West Point, Virginia on to Monmouth, New Jersey. “No problem Captain Decker” was Nick’s reply. “By the way, what animals are we transporting?” 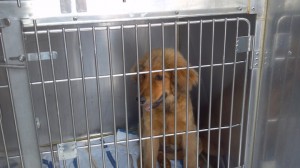 “Just some kittens and a few puppies.” This sounded easy enough and the plan was set in motion. Decker had one other request;  a dozen freshly shucked oysters, a dozen un-shucked, and a pound of jumbo lump crabmeat. What a guy! 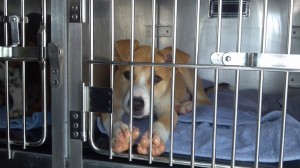 The night before the flight, Nick was copied in on an e-mail from the rescue giving a run list. The list included (this is not made up) 13 dogs and 4 kittens including an Irish Wolfhound! Now Nick, not a slouch in the thinking department himself, did the math. Wolfhounds tend to be rather big dogs as in the tallest of dog breeds. As in it would not fit in a little Cherokee by itself let alone with 12 other dogs and 4 kittens. He immediately dialed Keith up to question (A) his sanity and (B) if the sanity was intact did he buy a Pilatus or perhaps one of the 747s he used to fly. “No still have the 182” was his answer. That made it clear he was indeed certifiable. They’ll fit he said and the Wolfhound is only 28 pounds. What! How can a Wolfhound only weigh 28 pounds. “Well it’s a mix.” 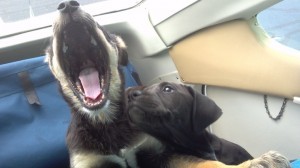 Nick feared telling O’Neil the whole story thinking he might call the men in the white coats on both he and Keith.  He stuck to the original story of some kittens and a few puppies. Keith’s plane landed in West Point 2 hours late in a strong crosswind causing him to do a kind of dance down the runway before planting. O’Neil was about to learn the truth. 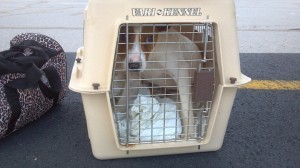 Let me out! I want to go to my new home, please!

The animals poured out of Decker’s Cessna 182. It was a sight reminiscent of circus clowns climbing out of a Volkswagon! Now Keith has state of the art collapsible kennels Nick and O’Neil had to use a variety of different size crates and decisions had to be made as to which dogs could bunk with whom. Somehow they all made it in the Cherokee including the Wolfhound which really did weigh 28 pounds. While he did question weight and balance O’Neil did not call the white coats!

The amazing and surely crazy Captain Decker had pulled off quite a feat. Now it was up to the two of them to equal the task. Decker grabbed his seafood, bid them adieu, wished them luck, and off he went. 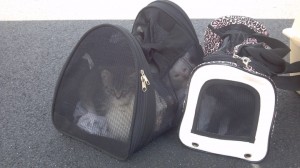 Nick took the left seat for the flight up to Monmouth. While filing their flight plan, O’Neil put in the remarks section they were transporting dogs and cats. The ride was a little bumpy and some of the trip took them into IMC conditions. Things improved dramatically after they were contacted by a remarkable flight controller out of Atlantic City ATC. This wonderful controller asked if they were the plane “carrying the puppies and kittens.” She actually read the flight plan! Nick replied affirmative and she went above and way beyond to help them find smooth air, changing altitudes, vectoring them to different headings, and questioning each time if the ride got smoother. Wow! 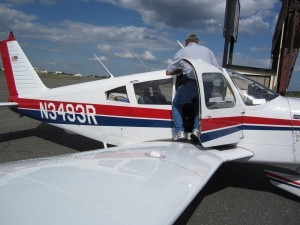 The animals all arrived safely and appeared no worse for the wear. The Monmouth County SPCA van was there to greet and unload the menagerie. Two exhausted pilots turned south and headed home with O’Neil at the helm. Not much was said on the ride back. Nothing needed to be.

As crazy as it all seemed in the beginning, their efforts saved the lives of seventeen more innocent animals that day. Sleep must have come easily for these three pilots.

That is what Pilots N Paws is all about!