Dog Survives Gas Chamber in Alabama and is Sent to New Jersey for Adoption!

Morris County: The animal-control officer loaded the dogs, one by one, into the death chamber. Four or five were facing their final moments of life as Cody Berry did what he had to do.

“It’s the toughest part of the job,” said Berry, who has spent the last five months working for the Animal Control Department in Florence, Ala.

Berry turned the key and pressed a button. A light came on, and carbon monoxide seeped into the chamber.

The 21-year-old officer walked away as the fumes overtook the animals that day last month. He spoke to a man who had come in hoping to adopt a beagle. A beagle just like the one dying in the other room.

A few minutes passed before Berry returned to the room. He turned the key and the light went off. Then something moved inside the chamber.

Berry was startled. Could a dog really have survived?

“I opened the door, he stood right up and walked right out,” Berry said. “He was fine.” 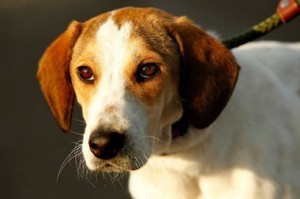 Daniel sitting on tarmac at the airport

It was the beagle, scared but unharmed by the chemicals that were supposed to kill him. There was no going back to the gallows for the miracle dog, destined, it turned out, for the Garden State. Volunteers at the pound took him, brought him to a veterinarian and then put word out to rescue groups around the country — to a little-known network of animal lovers.

Eventually the story of the stray that cheated death came to New Jersey. And on Wednesday, the 20-pound beagle mix, a sweet and calm guy now named Daniel, followed his legend north.

“He’s one in a million,” said Linda Schiller, the founder of Rockaway-based Eleventh Hour Rescue, a network of volunteers who took Daniel in. “This doesn’t happen. They don’t survive.”

It’s not unheard of, but Daniel does join a rare group of animals to make it out of the death chamber unharmed. He’s also the next “poster child” for those fighting to end the use of gas as a form of animal euthanasia. 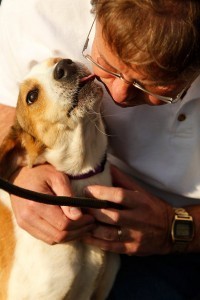 The practice has been banned in some states, New Jersey included. It becomes illegal in Alabama next year under a law named for Beckham, another dog who survived a brush with it. But across the country, many pounds still use the chambers instead of lethal injection.

The American Veterinary Medical Association, whose guidelines on euthanasia are set to be updated soon, says carbon monoxide is heavier than air so some animals could raise their heads above it. The group says the chambers are acceptable for putting down dogs.

But the American Humane Association, which has been lobbying to end the use of gas chambers for years, maintains the procedure can cost more than injections and can be painful for the animals. The group’s members prefer adoptions, but sometimes animals have to be put down.

“If they have to be, then we want them to have a good death, without struggle,” said Patricia Olson, the association’s chief veterinary adviser.

On Wednesday, he was taken to Jackson, Tenn., where he joined 11 other rescued dogs in a cramped, single-engine airplane. Scott Messinger, a volunteer with the group Pilots N Paws, flew the dogs north, making several stops before arriving at the Essex County Airport in Fairfield. Messinger, a Philadelphia resident, and other pilots with the organization provide transport for animal-rescue groups. 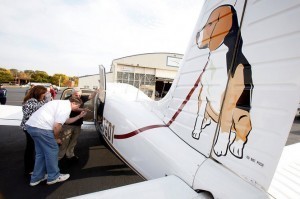 As soon as Daniel was on the ground, his tail started wagging. The dog, about 5 years old, seemed to have affection for everyone who came near him. For now, he’ll stay with Jill Pavlik, a volunteer who fosters animals for Eleventh Hour. He’s likely to be adopted soon, the group said. 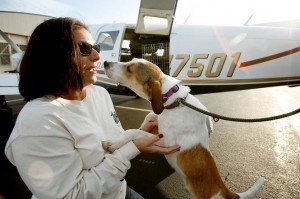 But Daniel isn’t going to fade from the limelight, said Roger Keyser, another volunteer.

“This dog has got to have some destiny,” he said. 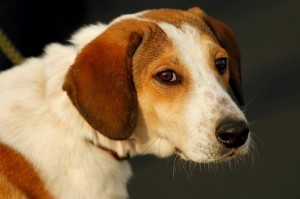 Daniel the poster child for NO GASSING campaign

For updates on Daniel’s progress, go to ehrdogs.org

The Birmingham News of Alabama contributed to this report.

More from Pilot Scott Messinger, one of Daniel’s Heroes:
We started in Jackson, Tenn at 7am, where we met Daniel, and 11 other dogs for their trip up north to their waiting rescue groups.
First stop was the 3 hour leg to  Greenville, NC where we dropped off 2 beagles to Ann from Sandhill Beagles.
Next stop up the coast was Easton, MD and Tammy, where we dropped off our 2 puggles.
Last stop- Caldwell, NJ,  where we landed with Daniel, our Gas Chamber Survivor beagle.
Daniels entire fan club was present, including 2 TV news cameras, and 2 newspapers, and about 20 or more people who couldn’t wait to make his acquaintence.
Daniel will now be a celebrity, and his gas chamber survival ordeal will serve to highlight the horrors of gassing dogs.
Here are 2 pics.
The first is Daniel, moments after surviving the gas chamber ordeal.

The 2nd shot is a much happier Daniel.  It shows Daniel and I having a “moment” just before takeoff.
Scott

Daniel and Scott, think Daniel is saying thank you Scott!