GREENVILLE, Ala. (AP) — On a recent June day, Jeff Bennett flew his four-seat plane from the mangrove-dotted Florida Keys, past some angry thunder clouds to the fertile hills of Greenville, Ala. His mission: to save 23 dogs destined for death row.

Bennett’s been airlifting animals for more than 3 years. Bennett is a dog lover; he has four of his own, including one that he adopted after a flight.

He’s carried mostly dogs, some cats, the occasional snake and once, a potbellied pig – earning his small Cirrus aircraft the nickname “All Species Airways” around the Pilots N Paws community.

But this month was special. On the Greenville trip, Bennett picked up his 1,000th animal. 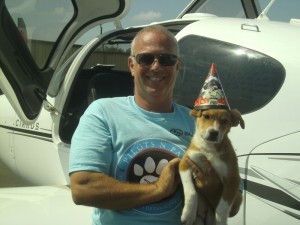 “This is a mile marker,” said Bennett, who had a pointy party hat decorated with pirates picked out for the special canine.

“We have only one other pilot who has accomplished that goal,” said Boies. “It’s extremely unique. He is truly one of the most dedicated people to Pilots N Paws.”

The dogs arrived soon after Bennett landed at the small, one-runway airport. They were in two vans, crowded into cages. Some barked and others trembled with fear. A small army of volunteers stood by to help Bennett transfer the dogs into his empty crates.

“OK everybody, if one of the dogs gets loose, don’t chase it, get down on the ground and just call it to you,” said Rebecca Harshman, a volunteer in Alabama who fosters dogs and helps ferry animals to the airport if a Pilots N Paws flight arrives.

One by one, paperwork was checked, photos were snapped with Bennett in front of the plane and then the dogs were loaded into a crate and into the plane. Bennett had taken out two of his plane’s four seats to accommodate all the dogs; even then, an extra puppy had to ride on the lap of a reporter back to Florida.

It was decided that Rex, a floppy-eared, mixed-breed puppy was Bennett’s 1,000th animal. He kissed the pup’s snout and hugged him tight.

Soon after, the plane took off, bound for Florida.

The dogs barked during the ascent, then grew quiet. Bennett stopped in Lakeland and Naples to unload the dogs, who were greeted by new volunteers that would give them new homes.