Fly me away: Pilots, volunteers unite to rescue animals

Pilots N Paws has transported thousands of rescue animals, often flying them hundreds of miles from where they were found so they can find forever homes. 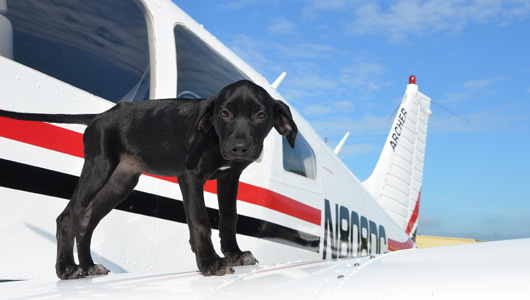 When animal rescuers found an emaciated German shepherd wandering the streets of Somerset, Ky., in December 2011, they knew the dog wouldn’t fare well in the overcrowded local shelter. Luckily, they found a German shepherd rescue group willing to care for the dog. The only problem? The group is based in Tampa, Fla.

Pilot Susan Delgado of Atlanta, Ga., saw the post and volunteered to fly to Kentucky to get the malnourished dog, who was full-grown but weighed only 35 pounds. Delgado didn’t have her own plane at the time, so she flew a rental to retrieve the dog and then drove him to Tampa after he spent a few days being spoiled at her Georgia home.

“He was just a gentle giant. If you told him to sit, he’d sit. He’d clearly been someone’s pet, but maybe they’d fallen upon hard times. He was just the most loveable dog,” Delgado said.

The German shepherd ended up being adopted by the Florida woman who fostered him. Five weeks later he was a healthy 88 pounds.

Pilots N Paws, an S.C.-based nonprofit organization, is the force behind stories like this one. The idea came to animal lover Debi Boies and pilot Jon Wehrenberg in 2008 when they teamed up to rescue a Doberman pinscher from a Florida shelter. Today, the organization has a network of 3,000 pilots and 12,000 volunteers who rescue animals, organize transportation and provide foster homes to dogs, cats and other animals. Since the organization was founded, it has coordinated more than 12,000 rescue flights.

“There’s no shortage of dogs that need homes, and there are plenty of people willing to give them homes. The problem is getting the dog to the right place. That’s where we come in,” said Kathleen Quinn, Charleston SC, Pilots N Paws executive director.

But Pilots N Paws isn’t just for shelter dogs. Volunteers have flown cats, dogs, snakes, pigs, rabbits, rats and donkeys to new homes. In 2010, the organization even worked with Navy SEALs in Afghanistan to fly an injured Steppe eagle to a New York bird sanctuary.

Still, Quinn says the organization primarily transports dogs. Most of the dogs come from overcrowded shelters where they’re likely to be euthanized, but others are simply going into retirement. 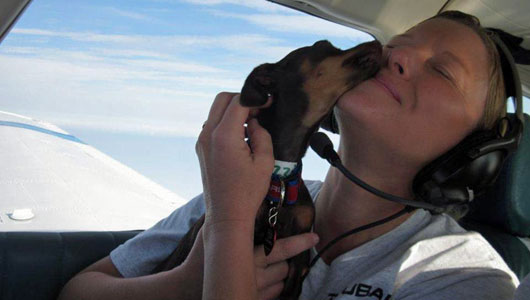 Rocky, a Belgian Malinois, was one such dog. He was employed by the U.S. Army as a land mine-detection dog in Afghanistan, but he developed glaucoma and could no longer work. Military dogs aren’t guaranteed a trip back when their service is complete, but Pilots N Paws teamed up with CDH International and Puppy Rescue Mission to transport Rocky to a new home in northern California.

And while many rescue dogs are flown to their new homes, others are taken to facilities where they can be trained as service animals

“What’s great about that is the dogs aren’t only getting a home, but someone in need is also getting a companion,” Quinn said.

But sometimes an animal doesn’t need rescuing at all; he or she just needs a temporary new home while their owner goes overseas.

“We also work with members of the military to get their pet to a friend or family member while they’re deployed. They do so much for us, and we want to do something for them in return,” Quinn said.

When an animal is in need of transport, a rescuer makes a post on the Pilots N Paws forum and gives details about where the animal is and where he needs to go. If the location falls within a volunteer pilot’s flying radius, the pilot receives an email.

Then, if the pilot can make the flight, he or she works with animal rescuers to arrange for pick-up and delivery. But not all transports are a simple direct flight. 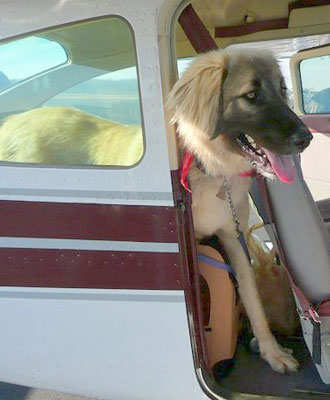 “Pilots are often limited to 250 miles for one leg, so we need volunteers to foster animals until their next leg of the trip. It’s a sort of layover for dogs. Sometimes a volunteer will even drive a leg of the trip if need be,” Quinn said.

Delgado, who’s flown about 100 animals to their forever homes, says that 20 percent of her flights involve coordinating with another pilot.

“Many people assume that we fly the animals places we’re already going, but the majority of the time they’re flights we’re taking because of the dog or cat. It combines our love of flying with our love for animals, and it’s great to do something for someone who can never repay you,” she said.