[If the video doesn’t show, please refresh the page.] The Independent Press ran a story on March 12, 2013 titled “Home for Good Dog Rescue celebrates dog rescues with dinner and 50/50 raffle” (click to visit the newspaper’s website). Pilots N Paws received an achievement award for the work it does.  The story follows.

On March 9, Home for Good Dog Rescue hosted its fourth annual Taste of Italy Dinner and Tricky Tray at Long Hill Community Center in Stirling. More than 300 people were in attendance including the Mayor of Summit, Ellen Dickson, who spoke during the opening remarks.

Also among the attendees at the event were Pilots N Paws Vice President Nick O’Connell and pilot O’Neil Jones. Home for Good connected with the nonprofit Pilots N Paws in January when it flew four of the rescue’s dogs from South Carolina to New Jersey. The pilots flew into New Jersey on Saturday and joined the rescue in celebrating close to 2,000 lives saved. They received an achievement award at the event. 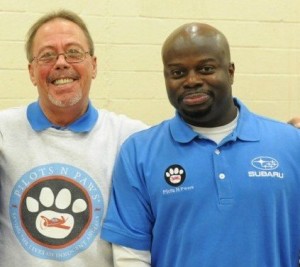 Home for Good has a network of 65 foster families in their area in New Jersey, but they also have a few local fosters in South Carolina and Georgia who take the dogs home when they are first found or signed out of the shelters.

There were more than 200 prizes at this year’s tricky tray. Among the winners of the night was Nikki Tongg, owner of Faux Paws in Summit, who won the 50/50 raffle. The Joan Dalianis Foundation provided a Matching Gift Program; the foundation doubled a certain amount of donations made and all went back to Home for Good Dog Rescue.

All profits went back to Home for Good Dog Rescue to help more dogs in need. 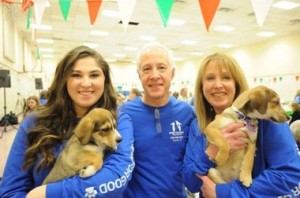 In 2010, the year the rescue began, about 200 lives were saved. This year alone, the rescue is on track to give more than 1,000 dogs a second chance at life. As a foster-based organization, Home for Good is always looking for new foster families to help their dogs transition into loving homes.

Visit homeforgooddogs.org for more information on Home for Good Dog Rescue. Adoption, foster and volunteer applications can be found on the website as well as all upcoming events. Home for Good Dog Rescue’s next adoption events are from 11 a.m.-4 p.m. on Saturday, March 16, at Petsmart in Bridgewater and again on Saturday, March 23, at PetSmart in Millburn.