Pilots Fly To Save Pups

Being a pilot is much more than having a passion for flight. True pilots enjoy using their passion to help others. That’s why pilots in Port Lavaca, Texas, recently took flight to complete a very special mission and help two organizations, Pilots N Paws and Great Escape Rescued K9s. 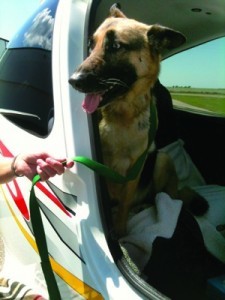 Each year, the volunteers of Pilots N Paws save thousands of lives. Those lives come in the form of any animal that can be transported using a plane. Dogs, cats, pigs, reptiles and rabbits are just a few who have taken one of their flights.

The flight began at Calhoun County Airport (PKV) with pilots Dianna Stanger and Mike Solomon departing into a clear beautiful sky on an IFR flight plan. The mission: To transport a 4-year-old German Shepherd, “Sista,” to Cleburne Regional Airport (south of Fort Worth) and transport a second dog, Buddy, who was rescued from a kill shelter in Arlington on the return flight.

Pet overpopulation is a disturbing problem in the United States. More than 4 million no-longer-wanted pets are euthanized each year. While spay/neuter programs have worked to decrease domestic animal populations in some parts of the country, other areas are considered high-kill. About 70% of dogs that enter shelters in the southern part of the country are euthanized. Until now, there have been few options for these innocent victims. Pilots N Paws is helping to change that.

Chyrl Burris, co-founder/co-director of Great Escape Rescued K9s, brought the German Shepherd to PKV. “We started Great Escape last summer when we were made aware of the plight of hundreds of German Shepherds being killed in kill shelters in Los Angeles,” she said. “We decided we were going to try to help save some.” Since then they have rescued 50 dogs in Texas and 39 in California. They also rehabilitate the rescue dogs to help them find a home. 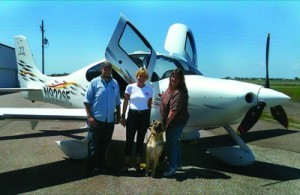 Stanger said, “Sista was a very sweet girl who seemed to sense that any journey she was on was taking her to a better place than the list she had been on to be euthanized. The little girl, Kylie Delafuentes, who got Sista will have a friend for life as Sista touched everyone the day we moved her — she could’ve easily been adopted four times just while we had her.”

“It was great from the very beginning when we met our young German Shepherd passenger for the flight,” Solomon commented, “with the aircraft doors wide open, the dog jumped right in just like she’s been riding in airplanes for years. She was calm and relaxed the whole flight, I didn’t much notice she was there, except to pose for the occasional in-flight pictures with her.”

“Buddy, a sweet little guy, took the back seat over and then insisted on trying to join us in the cockpit while flying to his new family back in Victoria,” Dianna added with a smile.

Looking at the request board on the Pilots N Paws website will give you an idea of the hundreds of dogs a day that need to get somewhere. The site provides a location where private pilots willing to contribute free transport, and people and organizations who rescue, shelter or foster animals, can connect to save lives. Today the organization, Pilots N Paws, has 2,466 pilot volunteers and 8,281 volunteers.

As this was the first time for both pilots to fly for Paws N Pilots, but it won’t be the last. “It’s something I hope to do often. It’s doing something I love, and at the same time helping bring a deserving animal who would otherwise face euthanasia to a loving family.” Mike said, “Who wouldn’t want to do that?”