Puppies in airlift of love: Rescued dogs are flown to Morris 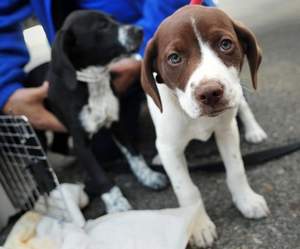 Morristown, Feb. 15, 2013 — Volunteers and staff from Home for Good Dog Rescue in Summit move 17 puppies from a Cessna to a van at Morristown airport Friday afternoon. The puppies are from Rock Hill, S.C., and were transported via plane thanks to the non-profit organization Pilots N Paws. By Karen Mancinelli For the Daily Record MOR 0216 puppyplane / B935619388Z.1

HANOVER — Seventeen puppies got a new lease on life when they touched down at Morristown Municipal Airport Friday afternoon, thanks to the efforts of nonprofit organizations Home for Good Dog Rescue and Pilots N Paws.

“The last transport on the plane we only had four on it. So we’re excited to have more dogs this time,” Bucuk said. “They’re a great organization that connects pilots with rescues and they pay for everything.”

During the week of Jan. 14, Bucuk said, Home for Good Dogs Rescue members visited open-admission facilities in Georgia and South Carolina and picked 100 dogs for transport to New Jersey. The dogs stayed with foster families in those states until they could make the next leg of the trip.

The mission of Home for Good Dogs Rescue “is to save dogs from euthanasia at high-kill shelters and provide them with a warm, loving home for good,” according to its website. Started in 2010, the organization doesn’t have a physical shelter, but rescued dogs are groomed and microchipped before its network of 70 foster families takes them until they find permanent homes.

“Our dogs become very adoptable because our fosters are really good at teaching them things,” Bucuk said. “It’s nice for the dogs. They came from a bad situation and we don’t like to leave them in a cage. It’s nicer to be with a family, so it’s great.”

The puppies, which departed from Rock Hill, S.C., and arrived at the airport Friday, included a litter of 13 that had been found abandoned in Aiken, S.C., and 6-month-old Collie-mix named Madison whose time was up at a shelter in Georgia, Bucuk said.

Pilots Nick O’Connell and Oneil Jones, both of Williamsburg, Va., landed the plane about 3:30 p.m.

“Once you do this, you can’t stop doing it,” O’Connell said, handing a puppy to a volunteer.