Pilot Scott Messinger With One Of His Passengers During His Record Breaking Weekend!

Day 2- Whiteville  and on to Atlantic City for a beagle drop off. Next Caldwell for the puppy delivery and Pet Resq. Scott had some tense moments waiting to depart the Caldwell Airport because all nearby airspace was closed while President Obama was at JFK. So, he just sat and waited for permission to take off, fearing the pups would overheat.

There have been many cases of pups dying from overheating and/or low blood sugar during long ground transports. Scott certainly didn’t want that to happen during his watch! He always carries Nutros (a high calorie paste designed for new pups in order to keep their blood sugar from crashing). So, they let them lick some off their fingers, and hoped that would do the trick. It did, and they landed safely in Newburgh, NY for the final puppy dropoff to Angels in Waiting. 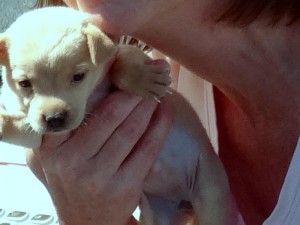 Day 3- Florence, SC to Shilo, NC and on to Baltimore, MD (where they got “trapped” between airshow acts.)

The crowds enjoyed seeing the “Pilots N Paws” painted up plane and our PNP pilots were almost as big a hit as the blue angels! They got to taxi up before a couple of hundred spectators, and they went nuts as we unloaded our precious cargo.

Lots of free publicity for PNP! The tower allowed Scott to sneak out between airshow performers, and they were soon in Philadelphia, where they met the fosters and unloaded.

So ended his 55 dog rescue. A personal record, even though the goal was 60. Not bad for 3 days work, though.

Click here to view more photos of this remarkable transport!